Observing the 2017 Solar Eclipse with Kids 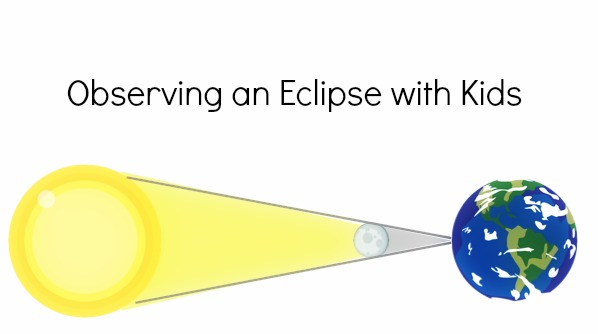 The chance to see an eclipse event in the sky is a wonderful opportunity to get  children excited about astronomy. On Monday, August 21st, millions of us in the United States will have the chance to see a spectacular total solar eclipse. The map below, from NASA, shows the path of the sun’s shadow during the total solar eclipse. You must be in that path to see a total eclipse, but a partial eclipse will be visible anywhere in the United States. The map also shows the amount of the sun that will be eclipsed, based on your location. 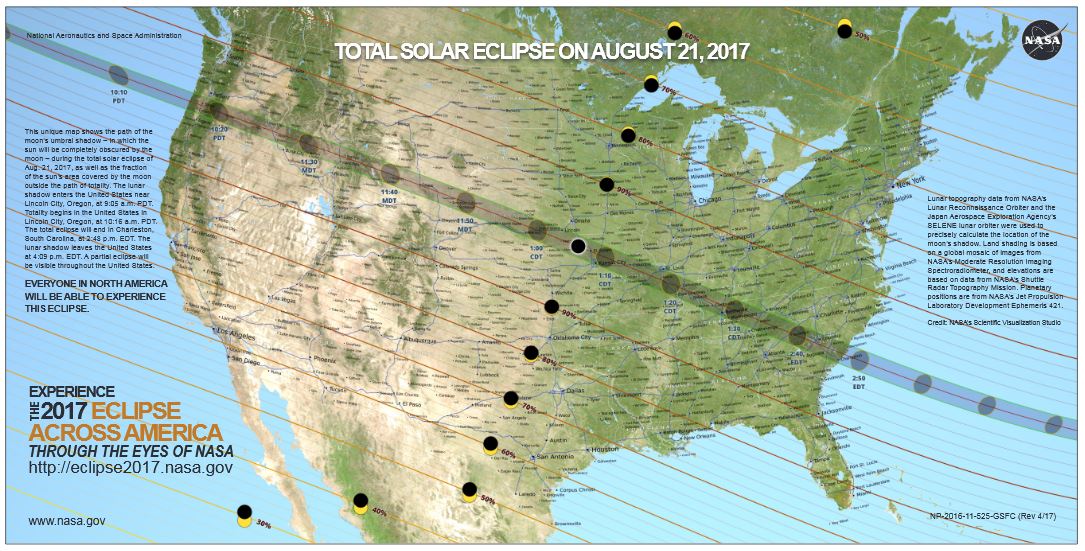 Never look directly at the sun with your unaided eyes, through binoculars or through a telescope– serious damage can occur. Sunglasses are not enough! You can find solar filters for binoculars and telescopes from many different sources. If you purchase a solar filter sheet, you can customize a filter for your own scope. You can also purchase a pre-made filter to fit the size of your scope. I prefer simple solar shades for eclipse viewing for children, or you can purchase inexpensive solar glasses.

The most economical option is to make your own pinhole projector for viewing the eclipse. The quickest way is to take two sheets of stiff white paper and using a pin, poke a small hole in the center of one sheet. Aim the hole at the sun, and holding the other sheet behind it, move it back and forth until you get a good image. 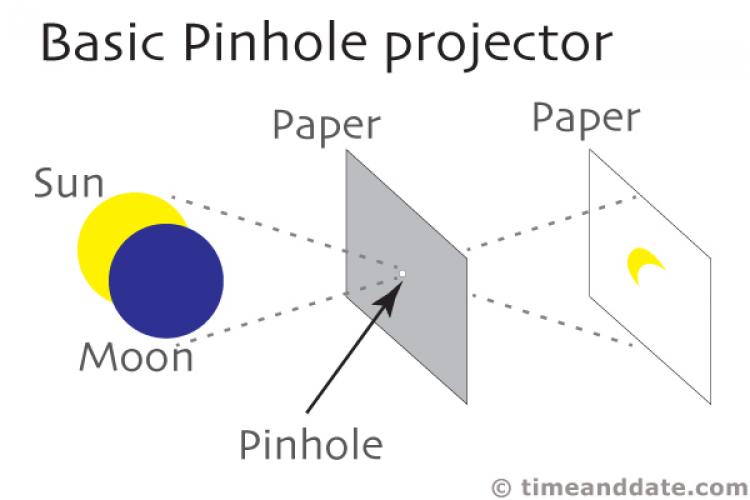 The Total Solar Eclipse site from NASA is my favorite place to find eclipse info. You could spend hours on their site learning about the science behind eclipses and exploring different activities to do with your children. The best thing that you can do to prepare kids to view the partial solar eclipse is to help them understand the Earth-Moon-Sun relationship during this event. During a solar eclipse, the moon is between the earth and the sun. (This is different than a lunar eclipse, which is when the earth is between the sun and the moon.) A solar eclipse is when the moon blocks out the sun, from our vantage point here on the earth.

Here is a great modeling activity (shown below) that I use with my astronomy students to help children understand this Earth-Moon-Sun relationship. 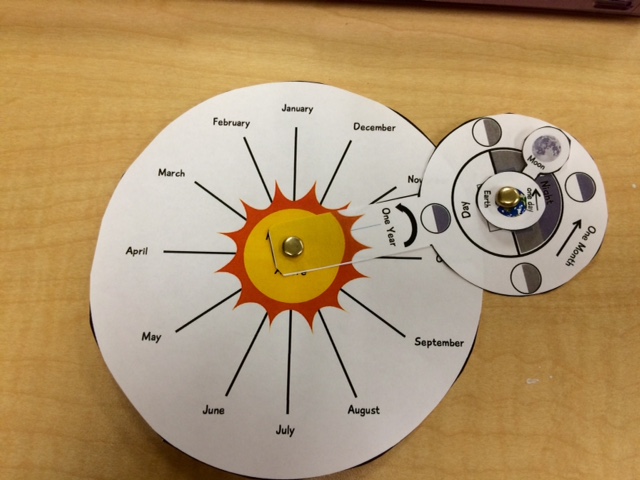 Having kids explore Earth-Moon-Sun motions in a kinesthetic way (with their bodies) really helps them understand these relationships. One great activity is to turn on a light source in a darkened room. A single light bulb works great– just take the shade off of a table lamp and draw the shades. Tell your child that his or her head is going to represent the earth, and have him hold an orange (or any spherical object) out in front of him to represent the moon. He can model the lunar phases by spinning around, holding the orange in front of him.  As he turns, he should see different portions of the orange lit up, representing the many phases. Then, have him stand with his head, the orange, and the light source lined up, so that the orange is directly between his head and the light. This represents the times when the moon is directly between the earth and the sun, during the New Moon phase. If the moon orbited the earth in the same plane that the earth orbits the sun, then we would have a lunar eclipse and a solar eclipse every month! But, the moon’s orbit is inclined about 5 degrees to the earth’s orbit. Twice a month, these orbital planes intersect– but not always during the right positions for an eclipse to happen. On average, some type of eclipse ends up happening about 5 times a year, but each can only be viewed in certain locations on the earth.

Eclipse viewing is such a great (and easy!) opportunity to share an astronomy experience with your children. As long as you are prepared for safe viewing, the Total Eclipse of 2017 will be an event that your children will remember forever!

For more ideas on sky-viewing activities to do with your children, visit Stargazing with Kids.

Please note that the Amazon links are affiliate links, and if you do click through and purchase, I will receive a small commission.