Where is the Big Dipper?

When most people are asked to identify one “constellation” in the night sky, their first answer is often the Big Dipper.  But, in fact, the Big Dipper is part of the constellation Ursa Major (the Big Bear), and is not an actual constellation by itself. The Big Dipper is what we call an asterism, which is an interesting and well-recognizable star pattern, while not one of the official 88 constellations. The Dipper can be found in many myths and legends, and is called by many names– including the Drinking Gourd and the Revolving Man. Regardless of what people have called it, it has been used throughout many cultures and many generations as a celestial tool for navigation. This is due to the fact that the Big Dipper can be seen year-round, and changes position in the sky throughout the year.

While most of us don’t plan on using the Big Dipper as a navigational tool anytime soon, it is helpful to know where to find it in the night sky throughout the year. 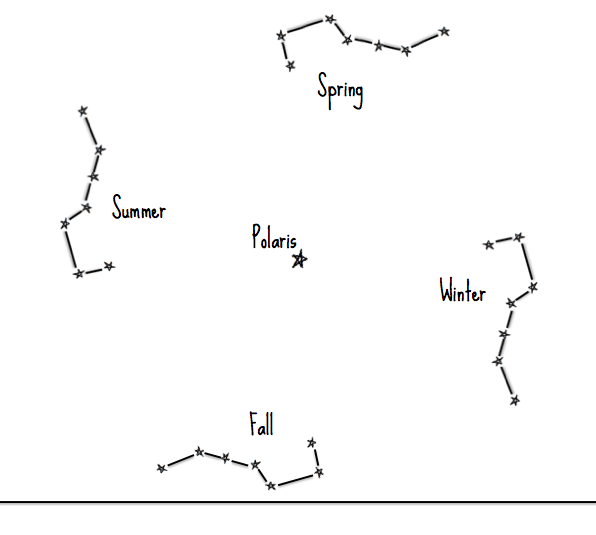 Here you can see that in the fall the Big Dipper is oriented like a spoon resting on the horizon, ready to catch the falling leaves of autumn. In the winter the Dipper is upright on its handle, like an icicle hanging down from the bowl. In the spring the Dipper is upside down, like it is pouring out heavy springtime rains; in the summer it is upright on it’s bowl, with the handle pointing up to the heavens.

The Big Dipper printable is available for you to download, with the drawing and seasonal explanation above.  Hopefully, this handy reference sheet will help you year-round while stargazing.

4 Responses to Where is the Big Dipper?