The myth of Cassiopeia and Andromeda

The sky is full of constellations based on myths and legends from ancient cultures throughout the world. This is one reason that stargazing is important for children, and also something that makes it fun for them. The fall sky is full of a cast of characters from one of these ancient Greek myths.

Queen Cassiopeia and her daughter, Andromeda 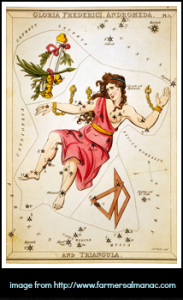 Cepheus and Cassiopeia, king and queen of Ethiopia, had a beautiful daughter named Andromeda. While she was one of the most beautiful young women in all the land, Cassiopeia was sure that she was the most beautiful of all. Queen Cassiopeia, being a proud mother and boastful queen, declared Andromeda to be more beautiful than the nymphs of the sea. This greatly angered Neptune, the god of the sea. In his anger, Neptune sent a horrible sea monster to ravage the coasts of Cepheus’ kingdom. The only way that Neptune could be satisfied was for Cepheus to sacrifice his daughter to the horrible sea monster. Andromeda was thus chained to a rock in the sea, to be sacrificed to the monster.

At this time, Perseus was passing by after having killed the horrible Medusa. This great hero saw the beautiful princess chained to the rock. Perseus agreed to kill the monster in exchange for Andromeda’s hand in marriage. Cepheus and Cassiopeia agreed to this, and the great hero swiftly killed the monster and freed the princess. Perseus and Andromeda lived happily ever after, and all four characters (Perseus, Andromeda, Cassiopeia and Cepheus) are immortalized in the fall night sky.

5 Responses to The myth of Cassiopeia and Andromeda