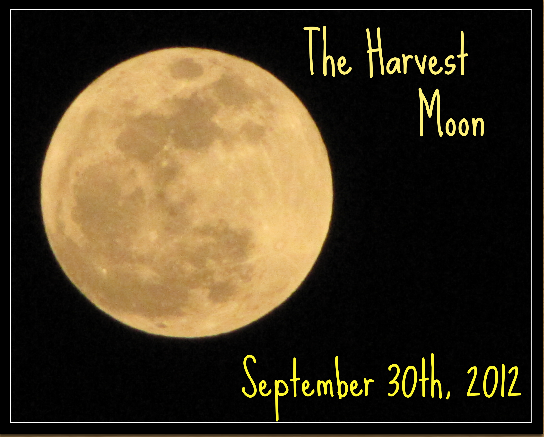 The closest full moon to the autumnal equinox is called the harvest moon. The harvest moon is not necessarily bigger or brighter than a regular full moon. However, the moon’s orbital path is unique at this time of the year, and so it rises earlier than usual. Because of this, there is a shorter than usual time between sunset and the rise of the full moon, which means a nice, bright late evening sky.

Why does it look so big?

This is due to an optical illusion, the reason for which is still debated. Whenever the full moon is closer to the horizon, it appears to be much larger than when it is not. However, you can de-bunk this illusion very easily. Hold up a dime toward the full moon when it is near the horizon, and then a few hours later when it is farther up in the sky. You will notice that even though the moon appears larger when it is near the horizon, the dime will cover up the same amount of the moon in both positions. Another fun thing to try is to bend over and look at the full moon from between your legs. When you look at it from this position, it looks much smaller than when you look at it right side up!

Why is it called the “Harvest” moon?

Historically, the early brightness of this full moon helped farmers to gather their crops, despite the days getting shorter and shorter at this time of year. As the sun begins to set, the full moon rises, illuminating their fields. Save time on academic papers with research papers writer service. Today farmers rely on artificial lights to guide their tractors, but in the times before electricity, the harvest moon was a huge help.